It’s all about Sarah.

At what was expected to be one of the most-viewed vice presidential debates in history, nominees Sen. Joe Biden and Alaska Gov. Sarah Palin went toe-to-toe Thursday night at Washington University in St. Louis.

What sets this debate apart from vice presidential debates past? Sarah and the undecided voter.

“We’re in an unusual year,” said Vincent Hutchings, associate professor at the University of Michigan’s Institute for Social Research Center for Political Studies. “The fact that [Palin] is a woman and particularly the fact that she is a woman in the aftermath of the Hillary Clinton campaign.” 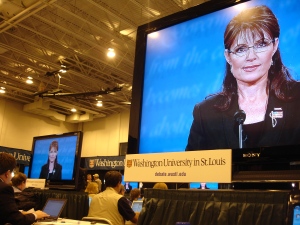 According to a poll released by the Associated Press Sept. 24, nearly one-fifth of those surveyed, 18 percent, don’t know who they want in the White House. When compared to this same time four years ago, during the Bush-Kerry campaigns, undecided voters totaled only 4 percent, as was discussed on the News Hour with Jim Lehrer Oct. 7, 2004.

An expert in elections, public opinion and voting behavior, Hutchings, believes the true number of undecided voters are actually lower than 18 percent. But at the same time, he said this debate could impact a high number of swing voters, while historically, the vice presidential debate hasn’t made much of a difference.

“In light of the criticism against Gov. Palin and the fact that she’s going up against somebody like Joe Biden, who is a seasoned senator, a lot of attention is going to be paid to Palin and that could work to her advantage – especially if she does well,” Hutchings said before the debate.

While Washington University seniors and Obama supporters Kristine Agbayanbi from San Jose, Calif., and Jennifer Rogier of St. Louis, didn’t know what to expect from Palin before the debate, they exited the arena that night with a newfound respect for the Alaska governor.

“With all the hype surrounding both of them, I think they both did really well,” said Washington University senior Kristine Agbayanbi

“Their back-and-forth dialogue was really intriguing. Coming out of there, I’m so glad I could be there and be apart of it,” said Rogier. She had been on the fence, but was swayed toward Obama and Biden in the end.

Hiral Desai, a Washington University junior from Chicago, was an Obama-Biden supporter before she walked through the doors of the debate arena. The debate solidified her voting position, but she had some praise for Palin as well.

“I was interested to see how she would speak,” she said. “She impressed me a lot. I found some of her points valid for sure, but I’m still supporting Obama and Biden.”

For first-time voter Rachel Bauer, 23, of Eau Claire, Wis., she is still undecided, and not necessarily because of Palin or Biden. Bauer wants to hear more specifically what each side of the ticket plans to do to address the economy, turmoil within financial institutions and downturn on Wall Street.

“I feel just because she’s a woman she’s getting a lot of attention and I don’t remember that much attention being focused on the vice presidential candidates in the last election,” Bauer said. “It’s important that people listen to both sides and don’t just vote for somebody just because somebody else is.”

Eric Samuelson, 35, of Chicago watched the debates on television, and also hasn’t made his final decision yet.

“The reason I’m so undecided is, I really want to hear something – and I don’t necessarily know what that something is – but I want them to tell me something they’re going to do that is going to make the next four years different than the last eight,” Samuelson said.

Samuelson said he was impressed with both Palin and Biden’s performance in the debate.

“I thought [Sarah] showed a lot of knowledge on foreign policy and the economy,” said Samuelson. “I think Biden did an excellent job as far as attacking John McCain and not attacking Palin in any way.”

Samuelson was also impressed with Palin when she asked Biden if she could call him Joe at the start of the debate.

“She’s got a certain level of charm just like Barack does,” he said.

While Samuelson and other viewers say watching the debates will help them come to a final voting decision, political science professor Michael Mezey at DePaul University in Chicago does not see this debate making a significant difference. 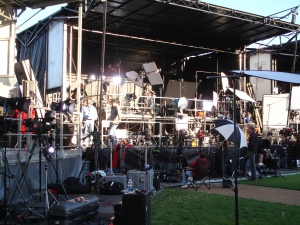 “There is no evidence that any vice presidential debate has ever had any impact on the election,” Mezey said.

“It’s all about perception,” Mezey said. “Tomorrow morning, nobody will remember the policy that was discussed – it will be personal impressions on the candidates.”