Standing outside the Deluxe Diner on the North side of Chicago in Rogers Park, Peter Magai Bul towers over the people around him. An acquaintance from the neighborhood swerves around sidewalk pedestrians on his bike and affectionately gives Bul a nod, calling him “Manute Bol” as he passes.

At 6 feet, 6 inches, Bul doesn’t quite reach the retired NBA star’s stature at 7 feet, 7 inches. But they do have other things in common: They were both born in Sudan and they both fled the brutal civil war. Now, in the U.S., they both work as activists seeking to educate the community and create change in their homeland.

Bul serves as president of the Ayual Community Development Association. Maketh Mabior, a fellow Lost Boy and lifelong friend, described Bul as someone who always has a plan, someone who has the answer and someone who works extremely hard.

“He’s somebody who would put himself on the line,” Mabior said. “He makes himself busy every day. Sometimes I say, ‘Peter, you have to take a break.’ The man is everywhere. He’s like an ambassador.”

Bul’s actions reflect a need to create change. One of approximately 125 Lost Boys of Sudan living in Chicago, 40 of who live in Rogers Park, Bul’s vision comes from an unbreakable bond with his fellow Lost Boys and those still in his homeland. 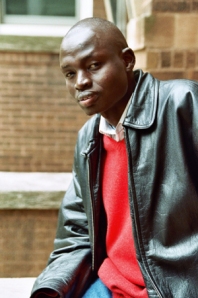 Lost Boy Peter Magai Bul works from his Rogers Park home to improve life in his homeland of Sudan. (Photo by: Erica Christoffer)

“You have Africans fighting Africans because they see difference in terms of religion. This is a religious war,” Bul said.

Bul ran away with his mother and proceeded to walk for three months with other children from his village to Ethiopia. But along the way his mother’s leg became infected and she could no longer walk. She rode on a truck carrying water back to Sudan. Bul continued on to Dimma, a refugee camp in the eastern part of the country.

He wouldn’t see his immediate family again for 20 years.

Humanitarian groups estimate that the ongoing Sudanese conflict between the government-run Islamic military of the north and the non-Arab Africans of the south has killed nearly 2 million people and displaced 4 million people. The United States Committee for Refugees and Immigrants says that one in five of the southern Sudanese population has died since the war started in 1983.

The south suffered, not just military-wise; no development took place in southern Sudan, no investment, and little employment. Schools were not built and there are no clinics. People are unable to grow crops and starvation grew increasingly common. Of the children in southern Sudan, boys were either targeted for military recruitment or killed. Girls were taken as slaves.

The youngest of nine children, two of Bul’s siblings died of illnesses before he was born. One of his older brothers fought in the southern rebel army. He now lives in Nairobi, Kenya with his wife. Bul’s father died in 1991 in the war.

The vast majority of those who fled Sudan were between the ages of 5 and 12. They slept on the ground or in trees. There was no shelter, no infrastructure.

“We lost a number of children. Some died because there was no water and so forth,” he said.

Bul lived in the Ethiopian refugee camp for four years.

“When it rained, you were only sleeping under a tree. Because you are sleeping outside, you get sick and you die. We saw hundreds of children die each day from hunger and disease,” Bul said. “We were only children. This is not something you would forget.”

The few adults present served as caretakers. Among the children, they selected their own group leaders, who divided the children into smaller groups and charged them with tasks. They would set out into the forest to collect wood. Some made small huts to sleep under. Others built fires and cooked for the group.

“Since we lost hundreds of children each day, and there were no adults to bury those children, you’d have to look within the group and send people to carry those dead bodies to the cemetery and bury them,” Bul said.

Bul, who was a group leader, would report back to the adults on the status of the children – who was alive, who died, what they needed.

Because many of the children came from different villages, they spoke different Afro-Asiatic languages. There were even different dialects within those language variations. They learned to communicate with one another using hand gestures and teaching one another words.

In 1991, the refugees were forced to leave Ethiopia due to civil unrest. They returned to Sudan, but not before crossing the Gilo River at the Ethiopian-Sudanese border. Thousands of children died in that river because the majority of them didn’t know how to swim.

It was only a few weeks after returning to eastern Sudan before the group left again, this time walking hundreds of miles to Kenya.

Bul lived in Kakuuma Refugee Camp in northern Kenya for nine years where they received aid from the U.N. and the Red Cross. He started school in 1993. Instead of going a week or more without food, now they’d only go a couple days without eating. The rations sufficed. They didn’t worry about picking wild berries or hunting for meals – which often made children sick in Ethiopia.

“It was better than Ethiopia, but it was still a refugee camp. Many of the children still died from disease,” Bul said.

A number of girls who made the journey were placed with host families in Kenya. The Lost Boys, as they came to be known, stuck together – they had become one another’s family. They lived in the camp among other refugees from Congo, Ethiopia and Somalia. There was no work for adults. Some materials were provided for them to build common areas.

“We’d go to the community and help with building those houses,” he said. “But it wasn’t secure. The local people sometimes were attacking us because they were struggling, too. They didn’t have food. So when we were given food by the U.N., sometimes at night they’d come in looking for something to survive.”

There was never comfort, never a period of safety or rest for Bul and the other Lost Boys. A question crept into his mind: “Will these atrocities end with us?”

“I think when you live in that situation, seeing so many bad things, seeing children dying, children giving up, and you have been in that situation for a number of years – you don’t worry about when your day comes. You’re not even scared anymore,” he said. “For me, I wasn’t concerned with what I had to deal with each day.”

His concern was with what children would have to deal with in the future. There were only between 12,000 and 16,000 Sudanese children left at that point out of the 27,000 who originally fled Sudan.

Bul could easily have been one of those who didn’t survive, and he knows it.

He recalled becoming very ill on the trek to Kenya in 1992, so ill that he couldn’t walk. They had a blanket that they used to carry dead bodies out to be buried. Sometimes they’d carry their sick in the same blanket. Bul didn’t want to set foot in that blanket. He forced his body to keep going.

“I remember when we stopped, we were walking at night and people didn’t want to be attacked. I couldn’t walk and I didn’t want to die with anyone. Some of the guys wanted to be with me. I told them to let me rest here,” Bul said. The next day he was on the road by himself. He collapsed under a tree on the side of the road.

“I don’t know when the ambulance came,” Bul said. “Someone had told them there was someone under the tree. The next morning I woke up in the bed. I wondered, ‘Did they capture me?'”

Then the doctors came in and Bul learned he was in Kenya. A month later he was reunited with his group at the refugee camp. They thought he had died. His clothing had been given away to other people.

In 1999, the decision was made to bring 4,000 of the Sudanese refugee children to the United States. “We had to go through different interviews,” Bul said. They chose boys who they believed would thrive best in America. He remembers the day the acceptance letters arrived at the refugee camp. The young men stood in a circle as the delivery person called out names. Some would pray before opening their envelope.

At the age of 19 after living in refugee camps for 13 years, Bul was one of the lucky ones chosen to go to the U.S. It was a bittersweet realization for Bul, who was happy he received the opportunity, but heartbroken that he was leaving the children he cared for.

In 2001 Bul became one of seven original Lost Boys to resettle in Chicago. His English was thick with a slight British accent. The boys had never been in an urban setting; never seen snow.

“Every time you met an American they don’t want to talk to you because you don’t speak English well. It was so hard to talk to them. I think that was the most difficult adjustment,” Bul said.

Bul started attending classes at Truman College in 2002, majoring in political science and pre-law. He’s now transferring to University of Illinois, Chicago. He got a job at a hotel and moved in with other Lost Boys in Roger Park. Things started coming together.

Yet Bul never forgot those he left behind in the refugee camp.

He began his work with the Ayual Community Development Association, a non-profit run by Lost Boys and American volunteers from all over the country. The group draws attention to the situation in southern Sudan and raises money to improve conditions and provide education for those still displaced. They have already built Pongborong Primary School in southern Sudan, fully stocked with books.

Mabior, who grew up in the same Sudanese village as Bul, made the trek to the refugee camps in Ethiopia and Kenya side-by-side with Bul. Their experiences have mirrored each other for 20 years. He, too, was a chosen Lost Boy who came to live in Chicago and works with the Ayual Community Development Association.

Bul has always been a leader, Mabior said, back in the refugee camps when he took care of other children and today as he organizes the community and speaks on the issues facing Sudanese people.

“Peter has a vision,” Mabior said of his friend. “We are going to change things in our country.”

Villagers voiced concern to him that if elections are not carried out properly next year in Sudan, then the war will continue.

“This is about equality. People should be given the opportunity to govern if they are capable,” Bul said. “There is a little peace now; so many people in the refugee camps are going back.”

For three months after making his homecoming, Bul said he could not talk about it. He was in shock, having seen the continued problems in his homeland.

In his head, though, he was planning – planning what he could do next to help. People are tired of war. Tired of refugee camps. They are ready for change.

Bul gave his word to support them. It is his lifelong commitment. His quest.

“We are the richest country in the world in terms of resources, but those resources have been misused. Then there is Sudan, one of the poorest countries in the world. We can use those resources to help them,” Bul said. “Giving people the knowledge will help in the long term. Education.”

Error: Twitter did not respond. Please wait a few minutes and refresh this page.